On Thursday 31 October 2019, six of Smith&Smith’s® leading technicians from around the country, competed to be the ‘Best of New Zealand’ in vehicle glass repair and replacement.

The competition, which provides the winner with the chance to represent New Zealand at the ‘Best of Belron’ international competition being held in Spain next year (2020), was held at Hilton Hotel, Auckland Viaduct.

The finalists were selected amongst a pool of technicians across Smith&Smith’s® 30+ branches, who had undertaken rigorous pre-comp testing and assessments.

After two days of tests and challenges resembling the Olympics of vehicle glass repair, Hamish Bedwell from Dunedin won the competition. On winning the event Hamish says:

“It’s still sinking in. I was really surprised to win because the other techs had done so well.”

Hamish was announced the ‘Best of New Zealand’ at the awards dinner that evening. Hamish won $3,000 cash, a $700 travel voucher and a new Samsung phone.

Most importantly, he has won the opportunity to compete at the Best of Belron competition in Spain next year. Hamish has been with the Smith&Smith® Dunedin branch as a technician for two years.

Commenting on the competition, Hamish said it was such a big relief when the final event finished and it felt like a huge weight had been lifted from his shoulders.

“I’m really proud to bring it [the ‘Best of NZ’ title] back to the South Island, but I think I’m going to have to shout lunch on Monday.”

Right now, Hamish’s main focus is getting some more sleep. 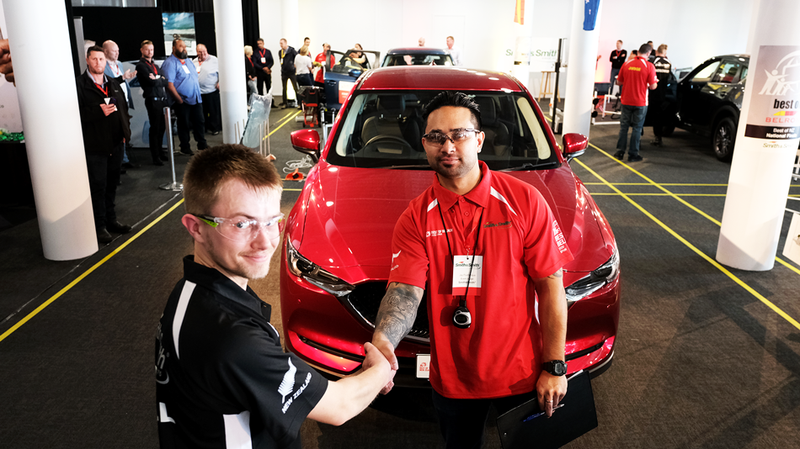 The Heats & assessments
The first assessment during the morning heat was for the technicians to check their workstation to ensure they had all the right equipment for vehicle glass repair and replacement work. The scenario was that they had stepped into a ‘foreign workstation’, with various pieces of equipment missing or in different places. There were 85 checks and steps that the technicians had to perform while being closely assessed by the judges.

During the next stage, three competitors performed a rear window replacement, while three other competitors replaced a windscreen. The scenario for the rear window replacement was that a customer ‘Mr Smith’ had been the victim of a vandalism attack – broken window – and upon closing the door onsite, the window had collapsed and shattered. Part of the assessment was how the technician interacted with the customer – a test of their customer service skills – as well as the safe clean-up of the shattered glass, followed by the full window replacement.

A critical part of the windscreen replacement test was ensuring the technicians had carried out the proper calibration of the Advanced Driver Assistance Systems (ADAS) – a task that Smith&Smith® only allows technicians fully trained in calibration to undertake. Each competitor also had to carry out a stone-chip repair.

Judging the event were either technicians who were previous winners of the Best of New Zealand event or Smith&Smith® Technical Performance Coaches.

Each challenge was done within strict time limits and the assessments were undertaken using the Belron global standards that Smith&Smith® has in place across New Zealand.

Each competitor had a dedicated vehicle for the day – six Mazda CX-5s were provided by John Andrew Ford & Mazda, each vehicle featured the competitor’s name, role and length of service.
The competition was attended by more than 50 of Smith&Smith’s® business clients, suppliers and team members, including Laser Group.

Second and third place
Tini Sao from the Smith&Smith® Glenfield branch came second, and Gavin Wairau from the Palmerston North Smith&Smith® branch came third. Both competed in the 2017 Best of New Zealand event.

asTech presentation
A key aspect of the competition focused on ADAS calibration, as its vital task Smith&Smith® performs when fixing and replacing windscreens to safely put vehicles back on the road.

In between the heats, guests heard from speaker Brian Castleberry, VP of Business Development at asTech, who highlighted some of the challenges in the world of diagnostics and calibration

PRESS RELEASE 14 MAY 2020 - Speaking today after the announcement of the Budget and the $1.6 billion Trades and Apprenticeships Training Package, Warwick Quinn, BCITO Chief Executive congratulated the Government.

A summary of the meeting held on 7 April.