From biochemistry to tiling

When Kelly Shibata of Ambience Tiling was studying pharmacy and biochemistry in her native Brazil, she would never have imagined she would be leading a team of Tilers in the South Island of New Zealand. 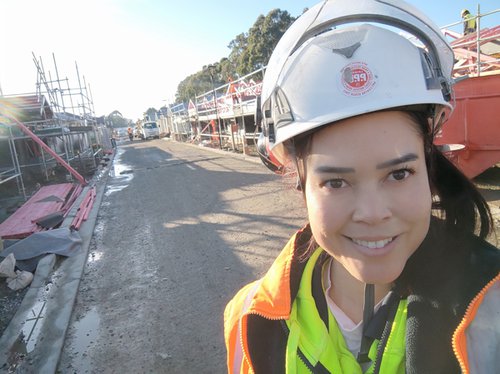 When Kelly finished her studies and made the decision to embark on a journey to New Zealand to learn English, she didn’t think a tiling apprenticeship would be the end result. “Initially my goal was to learn English and go back home, but the cost of being an overseas student was too high, so I decided to have a look for jobs in construction,” says Kelly. Not only did Kelly enjoy tiling, but she also fell in love with New Zealand and has stayed here ever since.

Kelly completed her apprenticeship with Toucan Tiling Ltd, where she was fortunate enough to have current BCITO Training Advisor Lance Aydon as her employer. Kelly had many enjoyable aspects of her apprenticeship journey, and it wasn’t all about the skills she was learning. “Learning how to do things myself was definitely an enjoyable aspect, but I met great people on my journey as well who taught me not just tiling, but English, and how to see things differently in life. My apprenticeship gave me more than just technical skills, it gave me life experiences too," says Kelly.

Having completed her apprenticeship and moved on to Ambience Tiling, a supervisor's role became available which Kelly jumped at. “My company needed a supervisor and I stepped forward for it. I had some experience in leadership at University already, and I wanted to keep going down this path,” she says. Kelly has also recently completed her Construction Trades Supervisor qualification with BCITO, but she believes she is still growing in this leadership role. “I am always learning on my day-to-day duties, learning how to communicate with my team, and how to get the best out of each individual in all aspects of the job," says Kelly.

As is the case across the entire construction sector, there is a real need for more women to pursue a career in tiling. So, it feels only right to ask Kelly what advice she has for those women who are thinking about a career as a tiler. “It’s not an easy job, but it’s not an easy job for a man either. Everyone can do whatever they set their mind to if they believe and are willing to work for it. I love my job, the look on the faces of the home owners when you finish their Tiling is rewarding," says Kelly.