Succeeding in the timber joinery industry 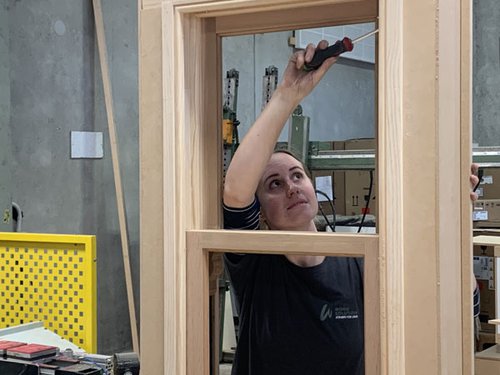 Changing career paths has become increasingly common in the past two years. People from numerous industries have found their way into construction apprenticeships and Annalise Theewis from Dunedin is smashing it. We caught up with Annalise, her employer, and her Training Advisor to talk about her journey to Timber Joinery.

"I worked for the TAB in video and sound for a time and then COVID hit, and I had to re-skill. I originally did a Bachelor in film and media along with a Polytech course, so I started looking at the trades and it didn’t take long for me to find Joinery. I’ve been in the apprenticeship since December 2020. When I was looking for work, I landed on Joinery and just started sending out emails and making phone calls. Andrew was the first one to come back to me and the rest is history," says Annalise.

Andrew Bellamy is the general manager of Wood Solutions where Annalise works. He shared his thoughts on Annalise’s progress so far, "We were sure about her from the beginning. She was renovating her house and had installed her own kitchen from Bunnings. She showed passion and care even at the interview stage. A month in, we were blown away by the speed at which she was picking things up. It’s been great seeing someone from a different background show so much care and accuracy in their approach Having an apprentice with a background in film and media has been a great asset too. She’s really customer savvy."

Annalise’s BCITO Training Advisor, Damon Scott, told us about Annalise’s study habits. He says it’s always a breeze coming out for assessment visits, "I show up and Annie’s got all of her theory work ready and usually has a bunch of extra stuff that I hadn’t even planned to ask her about."

Annalise shares her experience of BCITO, her workmates and life as an apprentice and says, "I can contact my Training Advisor easily through the myBCITO Canvas app and even over text. Having that support there is good. The workplace environment is great. I can go to pretty much anyone for guidance. Even the boss is really helpful, there’s not really a hierarchy here so people who can help you with something you don’t understand, will. It’s much more about teamwork. When I was at university, the work felt very individualistic.

"So far, my favourite piece of work has been a massive, curved staircase we did for a new house. My friends have been supportive of me making this change in my career. Some of them have started asking me for help with their own maintenance which is cheeky but it also feels good to be asked."

Annalise's top tip for people looking to break into the trades is don’t be afraid to just email and phone call everyone you can. Even going on site and talking to employers directly is great when you know what you’re looking for.