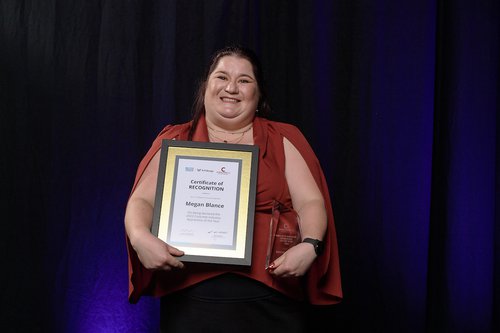 While Megan’s taking home of first place is an important first, she is at pains to point out that the sector’s diversity is growing quicker than people realise – and that there are opportunities aplenty for those who are willing to learn.

“For the workplace I’m in, there are women involved in all parts of the plant, so I’ve never felt hampered in what I can and can’t do. In fact, it’s been the complete opposite and I am truly grateful for the opportunities I’ve been given to date.”

Megan’s impressive story is a case study in the value of perseverance and how anything is possible if you put your mind to it – provided you’re willing to work hard and take the opportunities put in front of you.

“Like a lot of young people, I left school in 2003 not knowing what I’d like to do for a career. At this point, enrolling in, and completing BCITO’s concrete qualifications were not even on my radar.”

Megan’s entry into the industry came about via a friend, who suggested she apply for an office job going in Allied Concrete’s Nelson office. When Megan started in November 2016, she in no way envisaged that six years later she would be in a role contributing to commercial projects on a large scale, such as the Kaikoura Rebuild and Waikawa Marina extension.”

“A good thing about Allied Concrete is that they’ll take a chance on people who are genuinely interested in the industry and willing to better themselves. I worked in the office for the best part of four years, and during that time my supervisors (who could see I was interested) shared their deep understanding of the sector and how a plant operates.”

Megan didn’t follow the conventional route but is over the moon that she made the decision to try for a concrete apprenticeship.

“I am extremely passionate about the industry and love coming to work each day. Be it preparing work schedules for concrete laborers, estimating the materials required, and consulting blueprints and drawings to ensure accuracy, I love being in an environment where no one day is ever the same and you’re always learning.”

“There are plenty of opportunities out there for those who are willing to go out there and grab them. Because at the end of the day, you don’t know what you are capable of if you don’t challenge yourself!”