Emma McIntyre’s journey to becoming qualified in the Architectural Aluminium Joinery (AAJ) industry was anything but straightforward. 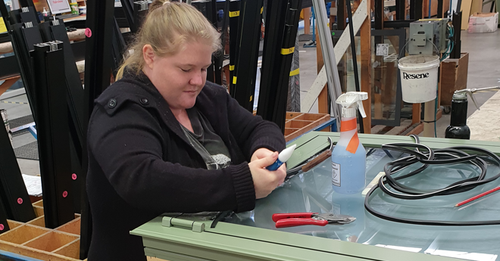 When Emma left high school, she went off to study to become a registered nurse, although this didn’t quite eventuate she did end up working as a caregiver for five years. Originally from Whangarei, she made a move south to Warkworth with her now fiancé with the intention of getting herself an apprenticeship. A friend of Emma’s through her time as a caregiver advised her that jobs were going at Elite Window Solutions and that she should apply, the rest, as they say, is history!

Not long after signing into her apprenticeship with BCITO, Emma was to receive some news that would change her life forever; she was pregnant with her first child.

With her child now almost a year old, Emma says, “Managing work and a newborn was a challenge but made a lot easier thanks to the support of Angela and the rest of the Elite staff.” Angela Dalton is Emma’s boss, and she can’t speak any higher about what Emma is achieving.  Angela says, “Emma is such a fantastic employee, she has taken to the trade so well, and the way she balances motherhood and her job is a real testament to her character.”

Last year Emma was nominated for the National Association of Woman in Construction (NAWIC) Student/Apprentice Excellence Award. Emma says, “I was so happy to be a finalist for the award, especially after the path I had taken in my career. I am a pretty humble person, so award nominations are such a nice bonus.”

When asked what has she enjoyed most about her apprenticeship so far, Emma says, “Learning everything, I like to know everything that’s going on inside and outside the workshop. It’s nice to be able to carry out a magnitude of jobs rather than just make a window.” Angela echoes Emma’s thoughts, saying, “Her attention to detail is amazing, along with her work ethic. It’s such a pleasure to have Emma as part of the team.”

As for where to next for Emma, she has just completed her apprenticeship and is already looking to make a start on a new strand of the AAJ qualification. When asked what advice she had for other women thinking of getting into the trades, she says, “Don’t be afraid, don’t worry what anyone else thinks. There is always going to be an employer willing to give you a go; just keep banging on those doors."

Resin applicators in a unique position

A tower of knowledge and skill

Glenn Bosworth of Bosworth Stone Ltd and Bosworth and Barthel Stone Restoration Ltd enlightens us to the practice that stonemasons had of carving caricatures of themselves into the stonework features.