Love the work? Get the qualification!

Roger Hoar is passionate about the Monumental Masonry industry. His great-grandfather, Thomas Hoar, opened the Hoar and Sons Ltd Wairarapa business in 1901, transporting memorials around the district by horse and cart. Next year the company will be 120 years old! 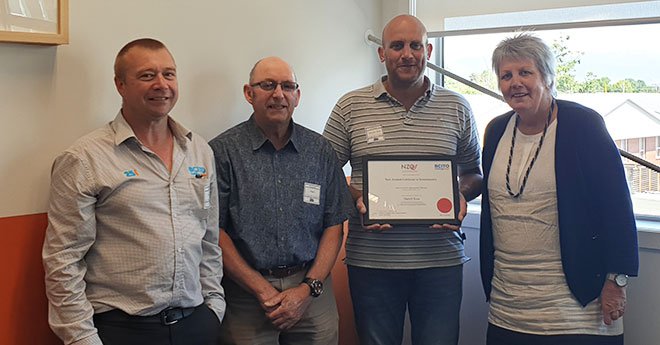 During his lifetime in the industry, Roger has seen a lot of change and has embraced new technology and methods, including sandblasting, letter cutting and graphic design. He even controversially rebranded the family’s company name to Headstones Wairarapa to make it more web-friendly!

Like many masons, Roger has given back to the community. He has restored many public monuments, as well as giving community advice on how to preserve memorials to loved ones, early settlers and war heroes. Today, the company is best known for its ability in the upkeep of war memorials. “I really love the work!” says Roger. “My most pleasing aspect of Monumental work is that we record New Zealand’s history, and also maintain New Zealand’s history through restoration.” In acknowledgement of the many years of service given to the New Zealand Master Monumental Association, Roger was awarded Life Membership in 2014.

Roger has had a long involvement with industry training, including assisting in developing standards for the industry and working with BCITO to create the current qualifications. “Having a qualification has meant everything to the Monumental Masonry Industry.  Most monumental businesses were family-owned. When my grandfather said to me: “Right Roger, you can do that by yourself.” I realised that I was qualified!”

A few years ago, Roger achieved the National Certificate in Monumental Masonry after having his knowledge and skill recognised through the BCITO Experience Recognition Process. “I officially received my qualification after about 50 years in the trade! At the time, I was New Zealand’s oldest apprentice,” says Roger.

Roger is an involved member of the BCITO National Advisory Group that meets twice yearly to provide industry feedback and assist with research to support and guide employers and apprentices.

At the end of 2019, Darrell Rose completed his Monumental Masonry apprenticeship under Roger’s guidance. He is the first trainee that the company has officially qualified. According to BCITO Training Advisor Jonny Best, Darrell has been a go-getter and has picked up the skills quickly. Darrell has been lucky to have someone as experienced as Roger to train him. Jonny says, "Darrell has a good mannerism about him when dealing with clients and is always looking at doing tasks in the most efficient manner." Roger confirms by saying, "Darrell brings a real talent to our business in Masterton."

Darrell’s qualification certificate was presented to him earlier this year by Her Worship Lyn Patterson, Mayor of Masterton. She says, "It was an absolute pleasure to present Darrell with his certificate and to also acknowledge the work of Roger over the past 50-plus years, and his encouragement of Darrell to complete his apprenticeship. Without the support and work of BCITO, this would not have been possible, and I appreciate the work they are undertaking with Monumental Masonry apprenticeships."

To those considering a career in Monumental Masonry, Darrell says, “It’s a great career with a wide variety of work. I get great satisfaction from seeing completed monuments I have created or worked on and knowing they will be there for many generations to come.”