Painting, one playhouse at a time

When searching for a change of pace after three years as a butcher, BCITO-qualified painter and decorator Tui Ruatita traded the carving knives for paintbrushes and hasn’t looked back since. 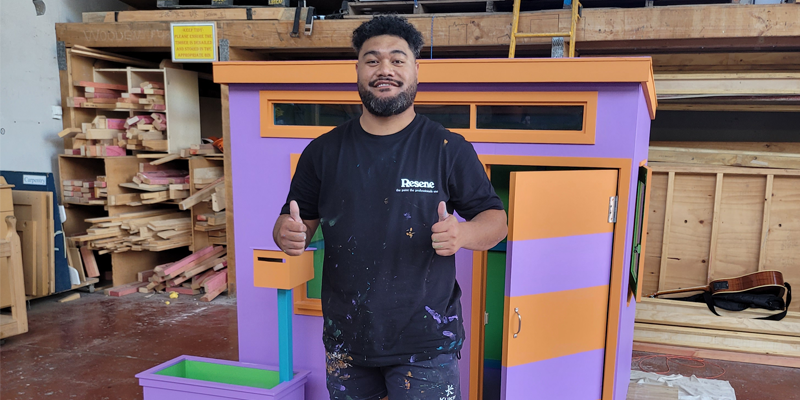 “I wanted to try something new as working in the same place every day was no longer appealing to me. I saw a job advertised for a painting apprenticeship and jumped at the opportunity to get out into the community and start an exciting new adventure.”

Tui found that the hand skills he developed as a butcher were useful in painting. And while there was still a big learning curve, he enjoyed learning new skills and made the most of his apprenticeship with BCITO.

“There was certainly more to it than I thought – in a good way. It was valuable to learn best practice skills across the huge variety of jobs in painting. My BCITO Training Advisor was supportive and helped explain the theory and encouraged me as I worked through my assessments, too.”

Tui’s strong practical and theoretical painting knowledge was recognised when he won the 2021 Master Painters Apprentice of the Year competition.

“It was an awesome experience. While competing against others was a bit nerve-racking, it was great to demonstrate the skills I had learnt during my apprenticeship. We were flown down to Christchurch and treated really well.”

The four contestants each had to build and paint a playhouse over the space of three days. They also had to order their materials for the job, which is an important part of being a competent tradesman.

“I wanted the playhouse to be big and bold – and opted for a range of colours split across several stripes. The judges noted that I didn’t have to use guiding tape, which was down to the steady hand I developed as a butcher!”

Tui has a long and bright future ahead of him in the painting industry. One day, he plans to go out on his own and start a business and he would also like to help Master Painters encourage other people to consider a career in the industry.

“I love the ability to transform spaces and places. You can turn an ageing, run-down building into something beautiful. That’s the best thing about painting.”

BCITO needs more people from all backgrounds to consider a career in the trades. Learn more.