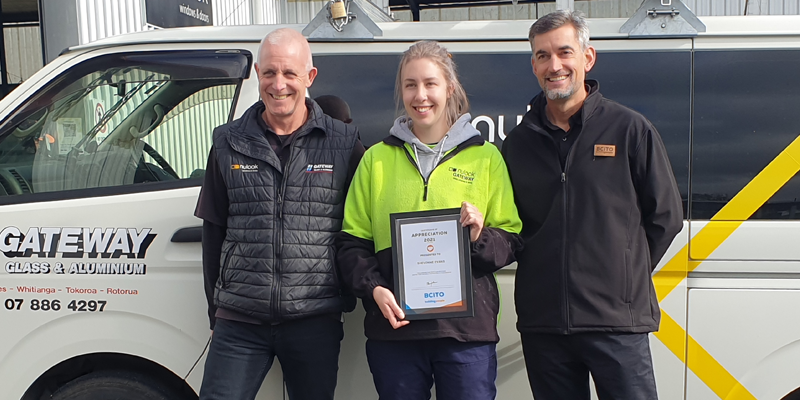 The 24-year-old has completed three Architectural Aluminium Joinery (AAJ) qualifications and was awarded the AAJ Apprentice of the Year in 2018. Shevonne is also one of only 10 women to ever complete the Level 4 BCITO supervisor qualification, after being awarded a BCITO Graduate Scholarship in 2017.

Speaking at the event, Beaglehole said that Shevonne has a bright future ahead of her.

"Shevonne is an outstanding young woman and a high achiever in her trade of Architectural Aluminium Joinery. As one of BCITO's ambassadors for women in construction, she has also accompanied us on visits to high schools to help us encourage other young women into careers in the building & construction industry."

Gateway Glass & Aluminium co-owner Shawn Evans – Shevonne's boss and father – says that he is enormously proud of her, and has seen her become an inspiration for women and an effective leader in the workshop.

"Shevonne has encouraged other team members to push themselves and has helped create a culture of friendly competition. She also inspired other women from around the area to join our team. When our foreman moved on to another position within the company, she took it upon herself to organise our people and has since developed into a great leader.

"From a business point of view, it has been great to have high-calibre apprentices. They are fantastic in the team and have led to other up-and-coming apprentices joining us."

Evans’ BCITO Training Advisor, Vaughan Crocker, who has been working with Shevonne for her three most recent qualifications says, “Shevonne always has a positive outlook and is driven to succeed. She is consistently working towards where she wants to be."

BCITO aims to lift the percentage of women in apprenticeships to 10% by 2025.

Acumen on behalf of BCITO