We are pleased to announce the release of the first Building, Construction and Allied Trades Skills (BCATS) Level 3 resources in te reo Māori.

The te reo Māori BCATS resources have been developed to help engage with Māori secondary schools and encourage more Māori to consider careers in the building and construction industry. They can also be used as NCEA unit standards.

A small launch event was held this morning at Ngā Taiātea Wharekura in Hamilton. The Principal and Deputy Principal of the whare kura, BCITO people involved in the project, students, and representatives from Waikato Tainui were present at the launch.

Michelle Treadaway-Ohia, Principal of Ngā Taiātea Wharekura, says, “This initiative makes the career pathway of building more accessible to rangatahi and these resources show our students that our language has value.”

At the apprenticeship level, while Māori make up 19% of all BCITO enrolments, they have a 69% credit completion rate. In comparison, non-Māori apprentices have an 82% completion rate. We want to improve this. The hope is that these BCATS units will help break down barriers at the secondary school level, leading to tangible improvements at the tertiary level. At the event, Kaaro iti-moeke, representing Waikato Tainui, said, “This is a natural progression in te reo Māori which means that the next step toward an apprenticeship in construction is a natural one, we endorse these resources.”

Up until now, only English versions have been available. Chief Executive Toby Beaglehole says, “This is a landmark moment for BCITO and signals our intent to work closely with Māori to improve educational outcomes.”

The first te reo qualifications (Level 3) will be released and available on myBCITO, our online learning platform for schools, and at bConstructive.co.nz shortly. Plans for Level Two and One are in the works. 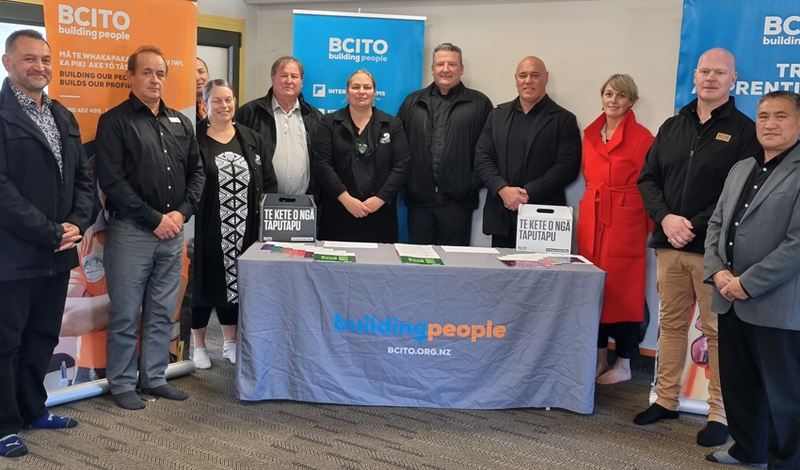 We now have 20,000 apprentices in training. To mark this milestone, Education Minister Hon Chris Hipkins and our CE Toby Beaglehole visited a Holmes Construction housing project.

Shevonne Evans of Gateway Glass & Aluminium is the first woman ever to complete four BCITO qualifications.