Flooring apprentice and employer of the year 2022 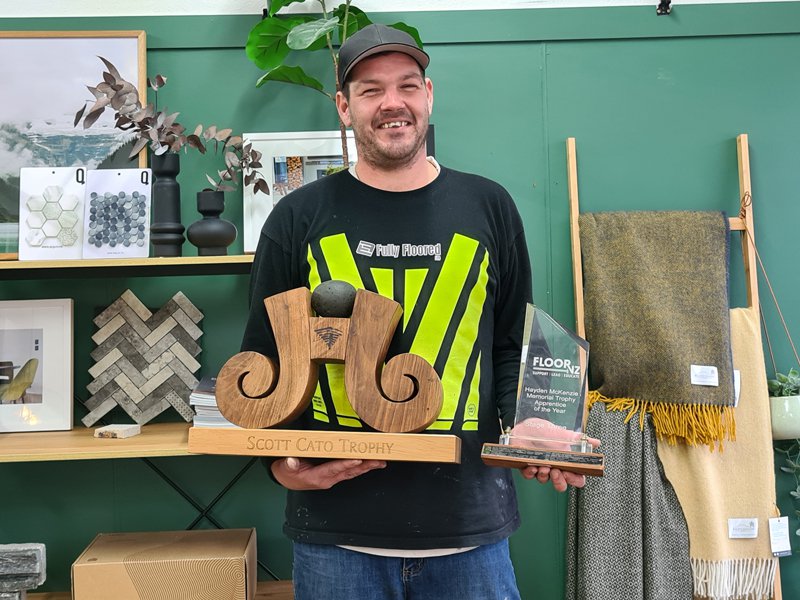 Joseph Murphy of Fully Floored in Feilding was recently awarded the Stage 3 Hayden McKenzie Memorial Apprentice of the Year as well as the Supreme Award of the Scott Cato Trophy.

For Joseph, a career in flooring was not something he had planned. Before his apprenticeship, Joseph was in general engineering for 12 years. He knew the team at Fully Floored already, and when he was offered the job, he thought he would ‘give it a go, as it was something different’. And he’s never looked back.

When Joseph was notified by his team that he was the recipient of both awards, he couldn’t quite believe it and thought they were joking. Nevertheless, once it all sunk in, Joseph was stoked with the recognition of his hard work.

The best advice that Joseph has been given is to do the job correctly the first time because going back to fix something is a nightmare for you and the customer. He also says it’s important to look after your knees and back. Don’t be afraid of being thrown into the deep end. It’s the best way to learn.

With his flooring qualification behind him, Joseph is happy where he is at with Fully Floored. His future goal is to work for himself one day. With other apprentices at Fully Floored, he is bound to be an inspiration and a role model to them.

BCITO would also like to acknowledge and congratulate Fully Floored, which was awarded the Wayne Young Trophy for Employer of the Year. This award recognises the contribution that an employer and their staff have made to industry training and the betterment of the flooring industry.

Congratulations again to Joseph Murphy for being awarded the Stage 3 Hayden McKenzie Memorial Apprentice of the Year and the Supreme Award of the Scott Cato Trophy. We look forward to seeing what his journey in the flooring industry will look like in the future and wish him every success.