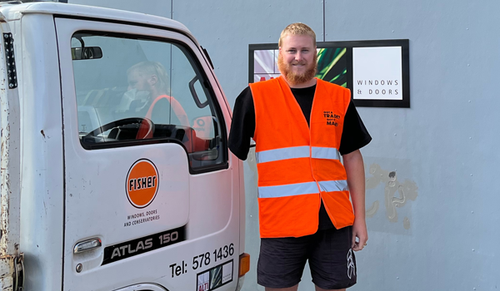 When asked why he wanted to progress with more qualifications after his apprenticeship, he said, "I might as well keep getting qualifications as I was already doing the work; progress upwards in the company, continue to learn and keep improving".

Not long after completing his first qualification in 2019, Denham was involved in a serious motor vehicle accident that resulted in his right arm's amputation. This meant Denham had to adjust to a new way of life and adapt how he operated daily. This also meant a change in his role at Fisher Windows.

Denham went from working on the tools as a fabricator and previous jobs that were heavily labour-based to an office-based role working with customers, looking at design plans and ordering materials. This was a change of pace for Denham, but he has taken this new challenge head-on.

Denham praises his employer Jim for being very supportive after his accident. Jim and Denham worked on a back-to-work programme together, and Jim even created a suitable role for Denham and was supportive of his shortened hours. Jim has also adapted Denham's new workspace to accommodate his disability.

Stuart Caulfield, Denham's Training Advisor, has nothing but praise for his apprentice. He says he was proud of Denham for his perseverance in the last few years, acclimatising to life after his accident, becoming a father, and gaining another qualification.

When asked what Denham's most significant achievement is since the start of his apprenticeship journey, he said, "I am motivated by getting back to normal life—finding new ways to do things and adapting equipment or myself to get the job done. I don't want people waiting on me, and I want to get on with it and not let my disability be why something isn't going right."

Denham doesn't let anything stop him from achieving his goals despite the challenges and setbacks he may encounter. A true inspiration to other apprentices in the construction industry.

'I am not what happened to me, I am what I choose to become.' Carl Gustav Jung